ETIAS as part of a Unified European Intelligence Agency 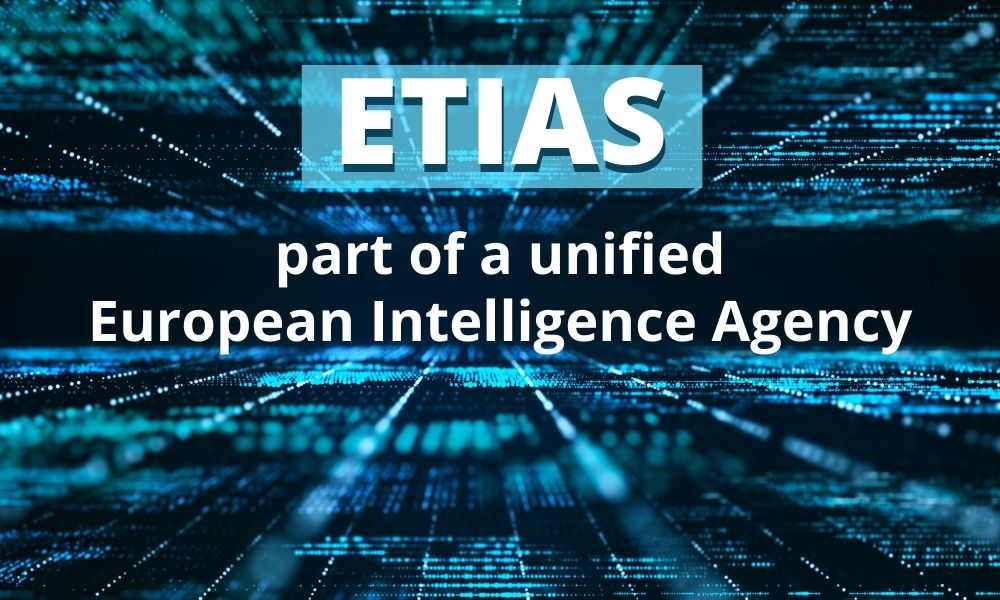 How the ETIAS will complement European Union intelligence and information systems.

February 2021 - Citizens of the Schengen Area of Europe have long enjoyed the ability to travel across internal borders. But those borders, which are also open to outsiders, brought an unknown risk factor, and the European Travel Information and Authorization System (ETIAS) is one measure that will change European travel and is part of a broader effort to make Europe more secure while still allowing for easy passage.

ETIAS will complement other European Union (EU) intelligence and information systems that will help identify security risks and increase law enforcement’s ability to respond to threats. Read on to learn more about ETIAS and how it will play a part of a larger European intelligence and security efforts.

What is the ETIAS visa waiver?

The European Travel Information and Authorization System (ETIAS) has been developed by the European Commission, the legislative arm of the EU. The goal of this system is to improve Schengen Area countries’ (26 total) security by retaining information about short-term and long-term travelers in the region.

This travel authorization, also known as a visa waiver, will allow non-EU travelers to travel freely across internal Schengen Area borders while keeping record of traveler identity and entry and exit at the external borders.

Information is held in a central database and may be cross-referenced with security databases, giving European intelligence units more (and higher quality) data to identify and track security risks, including migration concerns and human trafficking.

Will the ETIAS complement other EU government and law enforcement databases?

ETIAS is designed to be used in conjunction with other EU government and law enforcement databases. For example, let us say a traveler has applied for the visa waiver. The traveler will provide biographical information, contact information, and passport data, and the application will be tied to the traveler’s passport.

Processing the application will include comparing traveler data to databases of known security risks. ‘Hits’ on these database searches will result in further investigation in order to assess and mitigate risk.

If an application is approved, border security will use the visa waiver in partnership with the Entry Exit System in order to identify when non-EU nationals enter and exit the region. Other security databases include the Schengen Information System (SIS II) and the Visa Information System.

How is ETIAS meant to support border security of the Schengen Zone?

Up until the ETIAS launch, many short-term travelers could go to Europe with just a passport, leaving the European Union without information on precisely who is in the region and how long they have stayed there. Potential security risks could possibly travel more easily, and travelers could overstay.

Because ETIAS essentially pre-screens travelers, it helps restrict the movement of persons of interest. The travel authorization serves as a background check, and the application is processed through several European security databases to assess for risk.

Does the European Union have a central intelligence agency?

EU INTCEN has evolved since its inception in 2001 and contains two main divisions: Intelligence Analysis and Reporting and Open Sources Research (OSR). The other component to European intelligence is Europol.

Europol is the multi-national law enforcement body of the EU, and the agency works with intelligence and border security to tackle major issues such as cybercrimes, terrorism, and trafficking.

According the Europol website, “The European Police Office is a support service for the law enforcement agencies of the EU Member States. This means that Europol officials are not entitled to arrest suspects or act without the approval of national authorities. However, the support provided by Europol consists of tools that can contribute to the executive measures carried out by the relevant national authorities.”

Because Europol is an EU agency, it has the capability to investigate and fight more serious crimes that go beyond the local level.

ETIAS launches in late 2022. Get ready to apply.

The ETIAS the electronic visa waiver program will launch in late 2022 and will be required for travelers from 61 countries, including Japan and Australia. Be prepared for the application process and sign up for our ETIAS newsletter to stay up to date on European Travel Information and Authorization System and European travel information.

Learn more abut the ETIAS for visa-free travel to Europe in our complete ETIAS guide.